March 08, 2012
I just returned from a brief chat with a friend. Clemens is an artist of whom you will hear by the end of this year - a lot. I was sipping a beer in his crammed east-berlin soviet-era mini-flat, 'inhaling' as much of his wonderful paintings as possible; the intensity of his life beaming of every square-inch of color- and text-plastered canvas. He shares his last bottle of beer with me - because he wants to celebrate the occasion: his art just attracted the serious attention of a very, very important public figure, who already decorates his office with one painting by him (smack between a work by Immendorf and one by Lüpertz). That guy has a plan for a major coup d'etat involving Clemens' art - and it will benefit both. 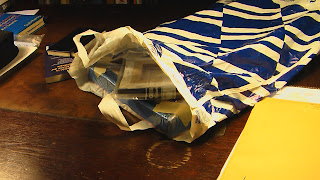 Up to now Clemens lives from collected bottles, some paintings he sells at insanely low prices and petty crime.
Now he is about to jump into major league.
His paintings have the expressive power that makes collectors nervous and renders some pieces of modern art so invaluable. He just can't not paint - even if he has to go steal the paint and snatch the brushes. He is driven. He often has to chose between eating or painting. And painting almost always wins. But now he gets the backing of a major player in the markets. And this will change the price-tag on his work. It would have changed the price-tag on any mediocre scribble of many a non-talented would-be artist.  And this is the scary part: one shark decides to promote an artist. And the ailing artist survives. If he decides to drop him, he is gone again.
As I leave, he grabs a plastic-bag and stuffs three oil-paintings inside - a present for me: "you will love those! You shall have them!" He never had a sense for commerce. I hope he survives the devilish love of his new-found promoter.
And long after I left I still smell the scent of sulfur that seemed to be lingering in the flat.

Popular posts from this blog

Academics should be blogging? No.

February 27, 2012
"blogging is quite simply, one of the most important things that an academic should be doing right now" The London School of Economics and Political Science states in one of their, yes, Blogs . It is wrong. The arguments just seem so right: "faster communication of scientific results", "rapid interaction with colleagues" "responsibility to give back results to the public". All nice, all cuddly and warm, all good. But wrong. It might be true for scientoid babble. But this is not how science works.  Scientists usually follow scientific methods to obtain results. They devise, for example, experiments to measure a quantity while keeping the boundary-conditions in a defined range. They do discuss their aims, problems, techniques, preliminary results with colleagues - they talk about deviations and errors, successes and failures. But they don't do that wikipedia-style by asking anybody for an opinion . Scientific discussion needs a set
8 comments
Read more

October 23, 2011
Rather involuntary train rides (especially long ones, going to boring places for a boring event) are good for updates on some thoughts lingering in the lower levels of the brain-at-ease. My latest trip (from Berlin to Bonn) unearthed the never-ending squabble about the elusive 'free will'. Neuroscientists make headlines proving with alacrity the absence of free will by experimenting with brain-signals that precede the apparent willful act - by as much as seven seconds! Measuring brain-activity way before the human guinea pig actually presses a button with whatever hand or finger he desires, they predict with breathtaking reproducibility the choice to be made. So what? Is that the end of free will? I am afraid that those neuroscientists would accept only non-predictability as a definite sign of free will. But non-predictability results from two possible scenarios: a) a random event (without a cause) b) an event triggered by something outside of the system (but caused).
8 comments
Read more

March 26, 2012
Great - now they call it 'information obesity'! If you can name it, you know it. My favourite source of intellectual shallowness, bighthink.com, again wraps a whiff of nothing into a lengthy video-message. As if seeing a person read a text that barely covers up it's own emptyness makes it more valuable. More expensive to produce, sure. But valuable? It is ok, that Clay Johnson does everything to sell his book. But (why) is it necessary to waste so many words, spoken or written, to debate a perceived information overflow? Is it fighting fire with fire? It is cute to pack the problem of distractions into the metaphore of 'obesity', 'diet' and so on. But the solution is the same. At the core of every diet you have 'burn more than you eat'. If you cross a street, you don't read every licence-plate, you don't talk to everybody you encounter, you don't count the number of windows of the houses across, you don't interpret the sounds an
3 comments
Read more